Today we look at films which have successfully incorporated a little bit of steampunk flavor within them. 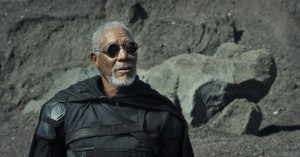 The Prestige was an extremely successful film that was based on the novel by Christopher Priest. It is a superbly atmospheric tale of resentment and jealousy set against the gaslit theatres of Victorian London and the Colorado laboratory of a genuine historical figure: famed physicist and inventor, Nikola Tesla (played by David Bowie). Tesla made significant contributions to the development of electricity and The Prestige sees him aid Angier’s quest to outdo Borden’s “teleportation illusion” act by inventing a splendidly Steampunk machine which can teleport a human for real. Olivia (Scarlett Johansson) is seen luxuriously draped in steampunk jewelry.  Also, Angier( Hugh Jackman) and Borden (Christian Bale) both sport steampunk jewelry and attire such as suspenders and vests in the movie.

Van Helsing was a big hit with action-flick lovers. The movie did so well that a video game was created in direct reference to it. Based on the vampire hunting character “Van Helsing” from Bram Stoker’s novel, Dracula, the film brings together several characters from contemporary “horror” literature such as Mr. Hyde, The Wolf Man, and Frankenstein in an entertaining blend of gothic fantasy. Enjoyable, action packed, and full of great steampunk touches such as Van Helsing’s wonderful gas powered crossbow – a sort of “steampunk-proto-machine-gun” which fires multiple bolts! Anna (Kate Beckinsale) struts around in a sexy steampunk corset in the film.

A Series of Unfortunate Events

Lemony Snicket’s A Series of Unfortunate Events is a visually stunning film with a dark, gothic, Neo-Victorian feel and plenty of laughs along the way. Steampunk is responsible for clothing the three Baudelaire children whom are left orphaned when their parents are killed in a fire. They are sent to live with a distant relative, the avaricious Count Olaf (Jim Carrey), but after a series of “unfortunate events” occur, they realise that the mishaps were far from accidental and that Olaf is plotting to kill them in an attempt to get their inheritance for himself. Many of the items in Olaf’s home, such as the telephone and clock, are steampunk inspired. The furniture in this family- friendly film is also essentially all steampunk-designed.

Based on the books by Philip Pullman, The Golden Compass takes place in an alternate universe where each human’s soul is embodied in a companion animal called a daemon. The story concerns Lyra (Dakota Blue Richards), an orphan living in a fantastical parallel universe in which a dogmatic theocracy called the Magisterium threatens to dominate the world. When Lyra’s friend is kidnapped, she travels to the far North in an attempt to rescue him and rejoin her uncle. The golden compass itself can be considered the epitome of steampunk. Mrs. Coulter (Nicole Kidman), the main antagonist of the film, flaunts steampunk jewelry in the movie. The Golden Compass is full of fantastical scientific machines and gorgeous sets with Victorian influence. The whole film just screams the word “STEAMPUNK”!

The newest steampunk film, Oblivion, is about a veteran, Jack, assigned to extract the Earth’s remaining resources. He is one of the few remaining drone repairmen assigned to Earth – its surface devastated after decades of war with the alien Scavs. Jack (Tom Cruise) discovers a crashed spacecraft with contents that make him suspicious about what really happened during the war. He begins to uncover hidden truths as he questions his mission and himself. The futuristic technology and old-Earth sceneries in the movie are very steampunk-inspired. Beech (Morgan Freeman) sports steampunk goggles like a boss in this action-packed thriller. Upon viewing the trailer, it is clear that this movie is going to be significant and popular with people from a vast demographic.