On August 13, 2013,  a few people from the Hudson Shakespeare Company put on a production of Shakespeare’s Macbeth, Steampunk style!  Directed by Noelle Fair, the play was their third installment of their twenty-second annual production. Fair decided to put a twist on the classic play by using steampunk-inspired clothing as their costume wardrobe. Many of the actors donned steampunk goggles on, and the dresses and menswear were a sight to see!

Some of the crew members had a minute to strike a pose!

Macbeth, a play written by Shakespeare, is filled with death, witches, and fights for the throne. Throughout the play, Macbeth attempts to conquer his fears, and complete the prophecies that the witches have filled him in on.  In the end, well, you’ll just have to find out what happens!

The play was held in Frank Sinatra Park in Hoboken, NJ, with the New York City skyline as the backdrop. The play ended just as the sun was setting – perfect timing for anyone leaving the office and looking for something to do other than sit in the house. The crowd mainly consisted of families and passer-bys by who stopped to watch what was going on.  It was completely free to anyone who wanted to sit and watch. What’s not to love?

So many people stopped and watched the play!

The actors and actresses did a fantastic job of getting everyone engaged with the play.  Even though Macbeth is hundreds of years old, the steampunk version of this classic play is very modern. Steampunk seemed to be the perfect costume line for a Shakespeare production. The Victorian-era garb and the dark gothic style was perfect for Macbeth, in particular. The goggles, however, were just an awesome modern touch to the whole collection!  There were even some steampunk accessories in there, such as eye patches and knives. 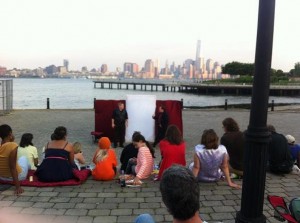 The scenery as the sun started going down behind the backdrop, perfect!

Along with being great at their roles, the actors and actresses had excellent original characteristics as well. They all loved what they were doing and wearing, and it definitely showed. It’s always good to know that the people behind the characters are just as awesome as they play itself!

Overall, the play is a wonderful experience in a great location. If you’re looking for a fun, low-cost night out, a steampunk themed play on the Hudson is a great option. You can even bring a blanket and some food to enjoy while the show goes on. They will be performing again in Hoboken on Monday, August 19th at 7:00PM at 410 Frank Sinatra Drive!

How To Do Your Steampunk Makeup
A Steampunk RPG Review