By Jenelle on Friday, Nov 15 2013 5:17AM in Steampunk Fashion, Steampunk lifestyle

Cosplay of any kind is a special occasion but for Steampunk it is a full-on event. Though its roots are literary Steampunk has evolved into an incredibly visual genre, and the first place people usually look to for Steampunk visuals is the costumes.

Cosplay is a phenomena that spans across all genres, and attracts artists of all types and skill levels for different reasons. For some it’s the construction of the costume, for some it’s the rush of getting every detail correct, and for some it’s the finished product, the actual dressing up and acting like the character, that keeps them coming back for more. It is, in general, a supportive practice and one that seems to recognize and applaud the achievements of others rather than just focusing on competing against them. 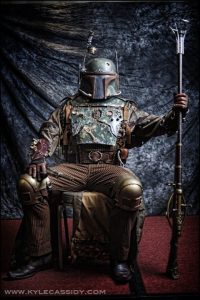 Steampunk takes cosplay and amps it up to 11 with most participants choosing to go big or go home. Steampunk costumes are regarded as some of the most elaborate in the cosplay world, and part of the reason seems to be the lack of restrictions of the genre itself. Traditionally, cosplay involves characters that have already been established visually. Princess Jasmine, Batman, Kal Drogo – they may have different looks in their own universe, and there is always room for creativity, but for the most part if you’re going to cosplay one of those characters there are some guidelines to follow if you want to look like them.

Steampunk is a realm of “What if?…” and most people reason that with all that freedom why not add as much as you can? There are some Steampunk characters in film, literature, and comics that people can choose from,  and Steampunking established characters is always a fun challenge that can yield some great results (We’re looking at you, Steampunk Boba Fett!). But the far more popular practice is for people to create original Steampunk characters and costume them. It is in this way that Steampunk differs from most any other cosplay. It’s the cosplayers that are populating and expanding the universe. 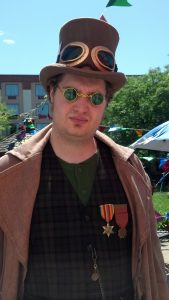 We asked Mike, a professional costume designer and avid cosplayer from NJ, how he felt Steampunk compared to other kinds of cosplay. With eight years of costume experience, and having created an original Steampunk character of his own from scratch, he agreed that Steampunk’s loose boundaries play a big part in attracting cosplayers. “There’s no limit. People go big because it is awesome to do so. The more steampunk you have the more steampunk you are.” In addition to creative freedom he feels the time period is also a key factor, “It stems from the past. It’s not a fictional world like Middle Earth or a fictional future like Star Trek. It’s our fictional past. It’s earth’s past or an alternate present. It take things that could’ve existed in the past and uses that as the basis for creating something in the Steampunk genre. There’s a romance about the time period.”

When you’re dealing with a fantasy world that involves everything from parasols to time machines anything is fair game. Making a totally original character gives a very personal connection to the clothes and the accessories til it’s not just about the costume –  it’s about full ownership of what you’ve created.