At SteampunkGoggles.com we’ve always been about collaboration and highlighting the work of talented artists, and we’re happy to announce our biggest collaboration to date! 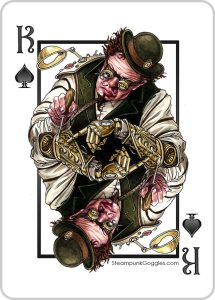 The King of Spades, The Tinker. Original artwork by Mike Lees

The deck is the brain child of Dennis Consorte, the founder of SteampunkGoggles.com and Consorte Marketing. After a chance meeting with the world of CosPlay Dennis became entranced by the world of Steampunk and launched SteampunkGoggles.com to bring the Steampunk community high quality goggles from top notch professional artisans. He never ceased to be amazed by the network of extremely talented artists who turned ordinary goggles into Steampunk works of art and decided he wanted to pay tribute to them by immortalizing their work. Dennis pulled a team together (myself included!) to build a multi-cultural deck of playing cards with each of the face cards wearing a pair of goggles by one of four artists, and each suit representing a different Steampunk archetype. The ultimate vision was a deck of cards that every Steampunk fan could enjoy; A deck about Steampunk, featuring Steampunk artists, created by and for Steampunk lovers.

SteampunkGoggles: The Deck highlights the work of four incredible designers featured on our website: Debbie Rounds (Dreamed Designed), Hans Meier (PH Factor), Mac MacGowan (Steambaby), and Graham & Stacy Faye Dehuff (On the Wings of Steam). Each artist was assigned a different Steampunk archetype that fit with the style of their goggles:  Mac, The Industrials (Spades), Debbie, The Gliterati (Diamonds), Hans, The Aviators (Clubs), and Graham & Stacy, The Lovers and Rogues (Hearts). Once the artists had been paired to a suit Dennis called in illustrator Mike Lees to bring the artwork to life.

It was important to Dennis that the deck be hand illustrated to capture the spirit of Steampunk, and Mike’s use of shadow, texture, and the only sparing use of computer rendering, made him the perfect artist for the job. From a studio in Brooklyn Mike worked closely with us to make certain that the goggles were well represented and that each suit captured its archetype. All of Mike’s designs were hand drawn and inked before being digitally rendered, giving the deck a personalized quality. 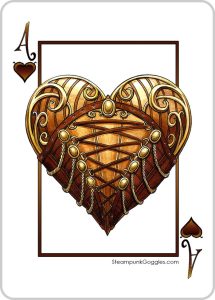 The Ace of Hearts, original artwork by Mike Lees

The final piece of the puzzle was to include the Steampunk community and so a Kickstarter campaign was born! Steampunk fans can help bring the deck to life by pledging any amount and by offering feedback on the card designs in the comments. Backers are eligible for a variety of thank you gifts including limited edition decks, goggles featured in the artwork, and most exciting of all, the chance to be in the deck itself! Certain face cards, including the two Jokers, are up for grabs at certain pledge amounts and offer the chance to be illustrated and immortalized in the deck by Mike.

SteampunkGoggles would be nothing without our Goggle designers, and our network of talented Steampunk friends. Help fund the project on Kickstarter here!

Get a Deck of Playing Cards on Kickstarter here!