Steampunk Journal is the UK’s source for Steampunk news

Type “Steampunk” into a search engine and you’re bound to find something you like, but what if you want all your Steampunk news in one easy-to-find place? Matthew deMaris, the creator of SteampunkJournal.org, has been working towards that goal for almost a year, and to great success. “I began the Journal on July 4th, 2013. In that short time, I’ve brought it up from the bottom of the pile to be the most popular Steampunk news site in the UK.”

SteampunkJournal.org is an independantly run website that features articles, interviews, essays, and reviews about all things Steampunk. deMaris writes a large majority of the site’s content and his topics range from personal musings (Why Steampunk Could Take Over the World) to polls about Steampunk culture (Steampunk Rules). In addition to his own writings deMaris welcomes and encourages guest writers to submit their work and be a part of the site. The archives are full of different Steampunk voices, including a featured article (written by yours truly) about our Kickstarter campaign. “I’m a champion of small business, so I’m always happy to promote smaller companies that have news or new products that they’ve released.”

The former full time photographer is a self proclaimed  “recent addition ” to the Steampunk scene, and says the idea to start the Journal happened very quickly. “I’ve always had a fondness for Victoriana and vintage, but I really got into Steampunk when I took pictures of Professor Elemental for my photography business, Photofairground, in March 2013. I wanted to know more about him, as I also liked his music, and started reading about Steampunk. I went to the Summer Solstice in Matlock and started the Journal shortly after.” 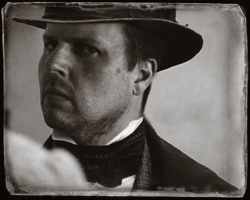 Steampunk Journal has changed quite a bit from its first incarnation as deMaris experimented to find the voice of the site, and find the best way to organize content to make it user friendly. “I’ve tried different styles of writing from very proper English to basic journo chat. I’ve settled on a polite tone with a friendly, more casual demeanour. I’ve also grown the pages available and compacted them into an easier to manage menu system.”

Over the past year deMaris’ love and knowledge of Steampunk has certainly increased due in no small part by the Steampunk community’s support for the growing site. “I like the inventions that some people can produce. I loved the late Datamancer’s work. He was truly astounding at what he did. I’ve met truly lovely people, no-one seems to have any hang-ups.”

With SteampunkJournal already many Steampunk fans’ go-to site in the UK deMaris still has plans to expand and grow. “In the new year, I’m planning a complete overhaul so the site has more of a magazine feel to it. I want SteampunkJournal to become the most popular site on the internet for Steampunk news, interviews, reviews, techniques and articles. I want to start to travel further afield. I’m based in Yorkshire (near to where steam engines were first devised) and I currently go to Yorkshire based events. I’d like to cover more of England and the UK then long term, spread out globally. I like to see the events and meet people, despite my shyness, and I think that’s what makes the Journal different to other magazines.”

Got an idea for a piece? Click here to learn how to submit to the site!