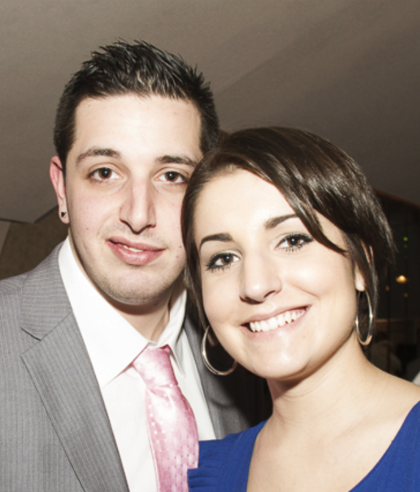 Dan and Julia, The King and Queen of Hearts in Steampunk Goggles, The Deck.

Steampunk Goggles, The Deck was made possible by lots of amazing backers including a few who pledged to have their likenesses appear in the deck’s court cards. But there was one backer who wouldn’t stop until he had secured not one, but two royal seats. Dan Garf, an engineering student and professional magician, was determined to not only claim a spot as the King of Hearts, but to also make sure his girlfriend Julia was securely seated on the Queen of Hearts’ throne.

Dan, also an avid cardist, stumbled upon Steampunk Goggles, The Deck’s Kickstarter in a routine quest for new cards to add to his collection. “As an avid playing card collector and a magician you can only imagine the vastness of my card collection. This has led to a lot of time spent on Kickstarter searching for up-and-coming playing card projects to become a part of.” 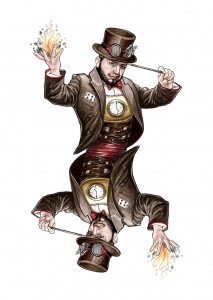 The King of Hearts, The Illusionist.

Not immersed in the Steampunk world it was the artwork that caught his eye, “By definition a cardist is typically a person who partakes in cardistry as an art form. But to me having a love for everything about playing cards is also part of the description. This includes the art, the history, the ability to amaze people with something so ordinary and simple. I was immediately drawn to this project by the artwork and the level of complexity within its details. As an engineering major at Binghamton University I have an appreciation for the mechanical and industrial aspects of Steampunk. And the fact that it is science fiction is even cooler.”

Knowing he wanted to back the project he saw the rewards included the chance to be immortalized in the deck. Excited, he immediately reached out to Kickstarter Commander-in-Chief, Dennis Consorte about how to secure both cards. “I’ve always wanted to be a part of something like this, and it presented itself as the perfect opportunity. And I thought it would be a romantic gesture to immortalize my girlfriend and I as an anniversary gift to the both of us. I reached out and expressed interest to Dennis via a short message, and almost instantly I received a phone call from him to work out the details.” 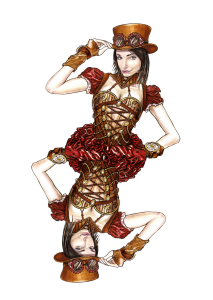 The Queen of Hearts, The Madame

It was clear from the conversation that Dan was a man on a mission and also head over heels in love with his girlfriend. “We met in Binghamton on a field in the middle of the Hillside community. I was lovestruck by her beautiful eyes, and dark features, and her short hair. Then I had to court her for a few months to win her over! The hearts represent love and my girlfriend and I are caught up in its nature. Also the descriptions for the characters that were originally on the project page were spot on for both Julia and I.”

The description for The Queen (The Madame) spoke of a confident, sexy, fearless business woman while The King was a dashing debonair gentleman. With Dan’s involvement, however, the King took on a new form and became The Illusionist, a dashing debonair magician. But through all the planning sessions, design incarnations, and art submissions he made it very clear The Queen’s card was his top priority; always giving feedback on those submissions first, giving suggestions on how to make it perfect, and ways to include very small inside references to their relationship in both cards. 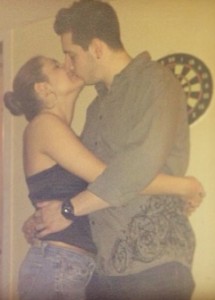 Two of a kind!

But before Dan could celebrate the project had to be funded. He wasted no time in spreading the word as far as he could to friends, family, classmates, fellow magicians, cardists, and the internet at large. He even convinced one friend of his that The Joker card might suit him. “That was a good friend of mine named Jake who just so happened to fit that archetype perfectly! Initially he pursued this just to help us gain support for the project but actually ended up being really excited about being part of the deck.”

Friends and family were shocked but in no way surprised by the romantic gesture. And as for the lady herself, “At first she was shocked too. Because she is very shy I didn’t know how she would react, but after a short conversation she was on board and excited as well. She supports my hobbies and passions. She is my go-to usually to demonstrate a new effect or magic trick, or to even talk about new ideas for playing card designs that I have.”

With the cards funded it’s only a matter of time before Dan is wowing people with them as part of his act and showing off his Queen for all the world to see!

Get the goggles these two lovebirds will be wearing when Steampunk Goggles, The Deck hits the streets! 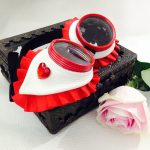 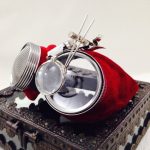