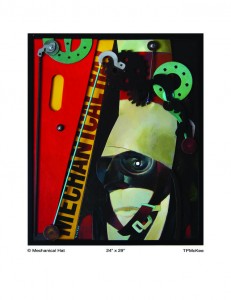 Steampunk is getting top billing at the Sangre de Cristo Arts center in Pueblo, Colorado. The arts center will be hosting its first ever Steampunk Exhibition featuring the work of local artists.

The surrounding areas of Denver and Colorado Springs have very large Steampunk communities that find their way to the Colorado State Fair to exhibit and sell their work. As jurors for the professionally tiered artists it was only a matter of time before the arts center took notice. Elizabeth Szabo, interim curator of visual arts, saw that Steampunk was not only a prominent voice it was a powerful inspiration for artists.

“The winner we chose last summer created these beautifully crafted trains out of railroad spikes. We recognized the steampunk theme in this artist’s work and as we continued to walk through all of the hundreds of pieces that had been entered, we saw so much work that utilized common steampunk motifs. We decided that there could be a wonderful underlying community here and the summer Steampunk exhibition concept was born.”

Sangre de Cristo’s exhibitions tend to be very popular with the community but it was a challenge to find the right way to spread the word to Steampunk fans in the area “We have had several notable exhibitions here in the past few years. A few of note would have to be the exhibition of hot rods and stock cars. Accompanying that exhibit were images from concerts of iconic musicians, like Elvis Presley, the Beatles, etc. We also had a wonderful exhibition of work that explored the plight of Cuban refugees. Because the steampunk community is not as established within the “art world” as much as other genres, our advertising was not initially aimed at the right outlets. We learned the hard way that these communities very much rely on word-of-mouth and social media. So now we are trying to use more of these avenues.”

Those who plan on attending the exhibition will find plenty of variety in the pieces chosen, including a juried exhibit voted on by a special Steampunk celebrity judge. “The juried exhibition is one part of a whole. Our building contains several gallery spaces, all of which will be bursting with steampunk art, culture, and history. The Steel City Steampunk Juried Exhibition is an exhibition of artists who have submitted work electronically. Each piece was juried by a sole juror –  Jeff VanderMeer, author of “The Steampunk Bible” – who chose pieces based on craftsmanship, originality, and how well it fit the theme of steampunk.” 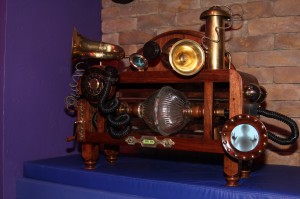 Those who want to get a jump on the festivities will have the chance to attend a Steampunk themed ball prior to the exhibition’s official opening. “We are hosting our 42nd annual anniversary fundraising event – this year it is the Steampunk Fantasy Ball – the week before the exhibition opens to the general public on June 6, so we have themed it as a steampunk event, to include food, drinks, entertainment, and of course fundraising events where attendees can catch great deals on things like artwork or ticket packages. Attendees get to see the exhibition first. We are really pushing costumes and hoping attendees take full advantage of the fun atmosphere this year. The public opening reception for the exhibition will be Friday, June 13 from 5-7 pm.

This introduction to Steampunk culture has not only been eye opening for Szabo but her hope is it will be to the attendees as well. One of the great things about steampunk as a genre is that it is all-inclusive. You will find people of all ages and backgrounds who participate fully, or just find it intriguing. This opportunity to gain the attention of new audiences with a fun exhibition is especially appealing. I’ve found that the more people get acquainted with the genre, the more they realize they’re already a part of it and embrace it. Hopefully this exhibition will help the steampunk community continue to grow. I want these artists to know that they should explore those formal channels as well. There are venues out there – their work IS valued as art and not just weekend costume commodity.