Scrapyard Empire is a fun game for two to four players that also includes a solo mode if you want to play a quick one-player game. The rules are easy to learn, where most people will pick it up within just a few minutes. But like many other great games, this one will take time to master, and you’ll discover new strategies and combinations of moves to pull ahead of the competition every time you play.

Rules to the Game

Scrapyard Empire comes with 4 decks of cards: the Parts deck (green), the Small Machines deck (orange), the Inventions deck (blue) and a set of character cards (brown). The object of the game is to collect the right Parts to build Small Machines, and then to collect the right Small Machines to build Inventions. Sound simple? Not so fast. In this race to the finish, you and your opponents will be dealt unique characters with special abilities. There are 8 characters that come with the game, and an expansion set of an additional 15 roles you can play. This adds to the replay value of the game by challenging you to adapt to your character’s strengths and weaknesses in order to win. In addition, as you build each new Small Machine, you acquire new, one-time-use abilities to thwart the competition. Remember, the object of the game is to trade those Small Machines in for inventions. So the challenge becomes whether to hold onto those small machines to use their abilities, or to turn them in and build your inventions. Trade them in too soon, and you miss out on some great advantages that can help you win the game. Hold onto them too long, and your opponents may build their inventions first and win the game. This is the sort of thing that comes with experience. And the more you play, the more you’ll learn about how to develop combos between the character you are dealt and the abilities of each of the Small Machine cards. 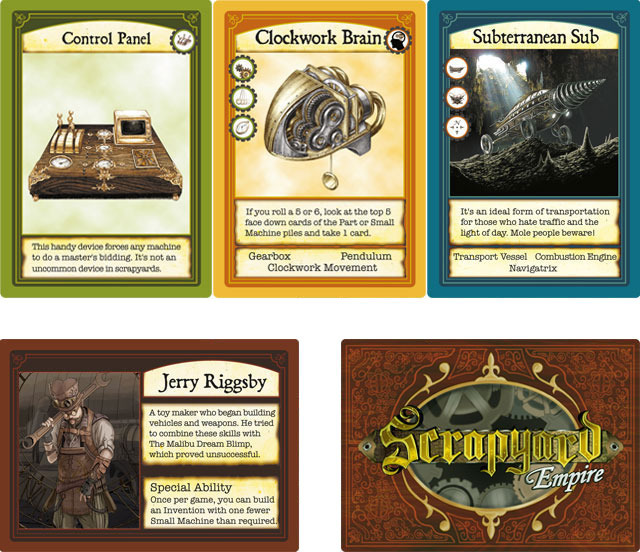 A Bit of Luck

If you like dice, then you’ll find that there is just enough luck in this game to keep you interested and coming back for more. With the use of dice, you have the ability to obtain the cards you need, besides just drawing them from each of the decks. For starters, as players discard unused cards or trade them in to build Small Machines and Inventions, they end up in the Scrap Pile. You can roll to “dig” through the scrap pile for cards you need. You’ve got a 50/50 shot at this, and a roll of a 4, 5 or 6 on a six-sided die is successful. Bad dice rolls? Scrapyard Empire’s unique rules allow you to offset that bad roll by “scrapping” extra Parts cards. So if you roll a 2, then scrap 2 extra cards and that 2 becomes a 4, and thus a successful roll. This mechanic satisfies even some of the purists who don’t want any elements of luck in their games. This touch of luck will also keep newbies engaged and in the running, to make tabletop game night fun for everyone.

Where to Get Scrapyard Empire

This game is live on Kickstarter now, and the campaign ends on July 16th. By backing the project through their fundraising campaign, you’ll be one of the first people to get a copy of the game, and you’ll even get access to some Kickstarter Exclusive components that won’t be available when the game hits the retail market. There is both a Basic Edition which comes with everything you need to play the game, and a collectible Deluxe Edition that comes with player mats and miniatures of the inventions. Want to learn more? Check out the campaign on Kickstarter and then decide if it’s for you. The Basic version is just $25, and the Deluxe is a reasonable $65, given all of the custom components it includes.