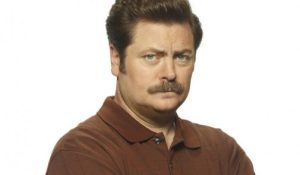 At first, the idea of TV’s Ron Swanson from NBC’s Parks & Recreation liking Steampunk is laughable. The gruff and rigid director of Pawnee Indiana’s Parks Department lives his life by certain principles, like keeping his accrued savings in gold bars buried in the woods, or believing that once you’re toilet trained you should be entirely self-sufficient (anything longer is excessive). A science fiction fantasy world with outrageous fashions might seem lower on the list of acceptable situations than “having to hug a clown”, but a closer look at some of the elements of Steampunk reveal that it might be more up Ron’s alley than we think.

Some people were just born in the wrong time. Where Ron is concerned, it feels more like he was born in a different time and refused to die because dying is for quitters. Steampunk typically takes place in Victorian England or the American Old West, and taking into consideration Ron’s disdain for Europe, he would most definitely flourish in the latter. Why? The government was weak in the outer territories, people ate what they could kill, whiskey was plentiful, and a man’s worth was in direct proportion to the amount of buckshot he had lodged in his skin. Add to that the chance for futuristic weapons ideal for hunting coyote or people who make eye contact, and I’m certain he would be on board.

“I’ll take a pair of Old Skool Filigree Goggles, please and thank you.”

Not known for his people skills, Ron typically prefers the company of a classic car, or barring that, a porterhouse steak. Extremely adept at building and repairs, Ron would probably welcome the challenge of extreme, futuristic mechanics that run on familiar power sources like coal and primitive electricity. And of course, this means that Ron would have to embrace goggles, which, given their manly context, I have no doubt he would.

Ron Swanson is a hands-on man. When most people would hire a plumber to fix a running toilet, Ron would roll up his sleeves and prepare to do battle with the bowl until one of them emerged victorious. Hint: The victor would be Ron Swanson. Steampunks pride themselves on making things from scratch, from costumes, to props, to self-publishing their own novels. They stage elaborate events, form and promote bands, and sell their hand-made wares because they believe artists should be paid for their hard work and creativity. This do-it-yourself philosophy would strike a chord with Ron, if the word Philosophy didn’t nauseate him at the deepest possible level.

Ron’s signature mustache is a beacon of manliness and a testament to symmetry. Most modern men don’t sport mustaches, but go to any Steampunk gathering and prepare to be overwhelmed by a sea of facial hair: mustaches, mutton chops, and full beards in all shapes and sizes. It’s like being a kid in a candy store, if candy was hair and you were a really weird kid. To a man like Ron Swanson, he would see a group of men who appreciate the simple majesty of a well crafted set of whiskers and would most likely offer these men his highest honor: a firm handshake. (One hand, single downward motion only) 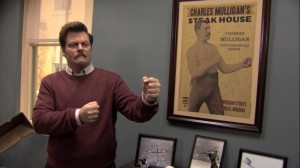 The 5th reason? The art of gentleman boxing

DIY the Ron Swanson way with these DIY Kits