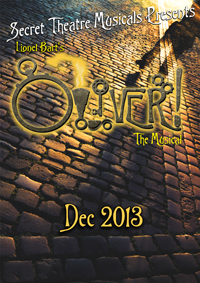 Oliver is a widely produced musical around the holidays but The Secret Theatre in Queens, NY will be adding their own twist to the familiar musical by amping up the story’s darker themes and setting it in an industrial Steampunk world.

The musical is of course based on the Charles Dickens novel Oliver Twist and set in Victorian London. Orphan boy Oliver is forced to work in inhuman conditions at the workhouse in return for shelter and a bit of food. One day he is thrown into the streets for asking for more gruel, and from there is shifted from home to home, and exploited by several deranged Dickens characters, until he finally falls in with a gang of child pickpockets led by the money-hungry and scheming Fagin.

Charles Dickens, himself a survivor of London’s horrific workhouses, wrote the novel to illuminate the plight of children who were forced into such situations to keep from starving. Over time the novel was adapted into a musical with music and lyrics by Lionel Bart. The large cast, well known songs, and many opportunities for child actors make it a favorite for theater companies to produce but it has also led to many productions shying away from the darker elements of the story.

The Secret Theater is not only embracing those darker themes, they are putting them front and center for all the world to see with a Steampunk flair. Costumes, props, sets, and choreography have all gotten a Steampunk makeover making it an Oliver you’re not likely to see anywhere else this season.

Director Lenny Banovez, choreographer Nicholas Sotack, and costumer Becky Willet have created a high concept production while still remaining true to the original musical. Sotack, a professional actor and choreographer with years of experience, was particularly excited to bring the Steampunk concept to life. “Having always been a huge Doctor Who fan, the world of Steampunk has alway captured my attention! We have kept the integrity of the musical however we have embraced the darker undertones that are more prevalent in the novel.”

“Oliver was always on the list of shows the Secret Theatre wanted to produce and it completely lent itself to the Steampunk world almost effortlessly. Apart from the fact that Steampunk culture is cool ( to myself and many others) it truly gave us a way to make a classic musical fresh and fun. The show is set during the industrial revolution which provides the perfect backdrop for a Steampunk theme.” 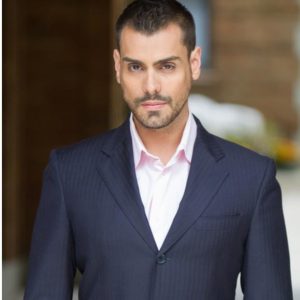 Nicholas Sotack
Choreographer of Steampunk Oliver at The Secret Theatre

According to Sotack this production will be telling a story visually as much as it will with songs and dialogue, “The costumes definitely reflect time travel as well as the actual period of the piece. The costumes and wigs are must see works of art created by the amazing Becky Willet. They greatly inspired how I choreographed each character. The element of time travel and fantasy is what really grabbed me and I think is reflected in my choreography.”  The costumes by Willet will of course include a variety of Steampunk goggles, which Sotack feels are more than just props. “ The goggles become a metaphor for time travel. Serving as a portal, a looking glass through which one might step.”

The introduction of Steampunk opened up new possibilities not only in the show’s design, but by helping to  bring out issues not typically addressed in most productions. “Thematically (without giving away any SPOILERS) we have introduced modern themes of sexuality, gender identity and social commentary.”

Buzz has already begun to spread about the production which opens this Friday night, and the production team is expecting a large turnout of Steampunk fans and theater goers alike.

“Steampunk grabs people. I think it’s the universality and inclusivity that most Steampunk fans respond to. I believe the public will enjoy this production. All of the classic elements that give Oliver its place in the musical theatre canon are enhanced and stylized with witty and fun elements that make the show worth reviving. Any theatrical work can offer a fresh perspective on the human condition through any genre. In this case the world of Steampunk!”

Get your tickets here!

Meet the Winners of Our Steampunk Pin-to-Win Contest
Steampunk Goggles: The Deck – Help make a deck of Steampunk playing cards