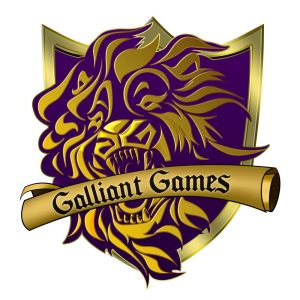 After the success of Steampunk Goggles, The Deck we got to thinking of what else we could accomplish if we put our collective heads together. We found that one of the many reasons we loved this project so much was that a deck of cards has so many uses and most of all it’s a great way to get people together. What if there was a way we could do more of that? The answer was to create a place where we could. And so, Galliant Games was born.

Galliant Games is a gaming company devoted to creating tabletop games with interesting mechanics and amazing artwork. The goal is to make games we’ve always wanted to see that everyone can enjoy, from casual gamers to seasoned pros. Going forward we want to develop games in all different genres from traditional board games, to micro-games, to role playing games, and work in a lot of different themes from Steampunk to horror.

For the first project for us as a gaming company we wanted to keep that social card game aspect but take it to the next level. We’ve been developing and play-testing our first fully realized game for several months and once we get a few more things in place a Kickstarter will soon follow! Backers from our last Kickstarter campaign may recognize some familiar names and faces as most of the team behind the goggle deck will reunite to bring you this new game. But what is the game? We’re so glad you asked! 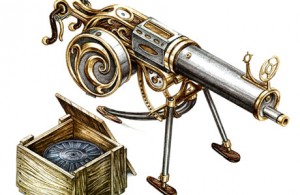 What happens when an eccentric billionaire dies without an heir and his will reveals a strange contest that will determine who will walk away with a piece of his estate? You get Scrapyard Empire, a deck building game for 2-4 players where each person competes to get their hands on that inheritance by being the first to build fantastical inventions. The game centers around a player vs. player mechanic that requires you to build up your own resources while playing cards that affect your opponents. Besides strategy there are plenty of things left to chance such as the ability to form alliances, backstab, roll dice, and use special character abilities. No two games are alike and there is the potential for future expansions which will allow players to build up the deck.

The game features over 150 cards with artwork by Mike Lees, whom many of you remember as the artist behind Steampunk Goggles, The Deck. The designs and characters have a Steampunk flavor to them and we’ve had a blast coming up with them. We’re also planning on including dice and a full set of instructions for different modes of gameplay.

Though this is our second Kickstarter it will be our first fully developed game and we’ll be looking to our amazing backers and fans for feedback along the way after we launch. Till then make sure you stay connected with Galliant Games by liking us on Facebook, following us on Twitter, and checking out our blog for articles on gaming and company announcements.